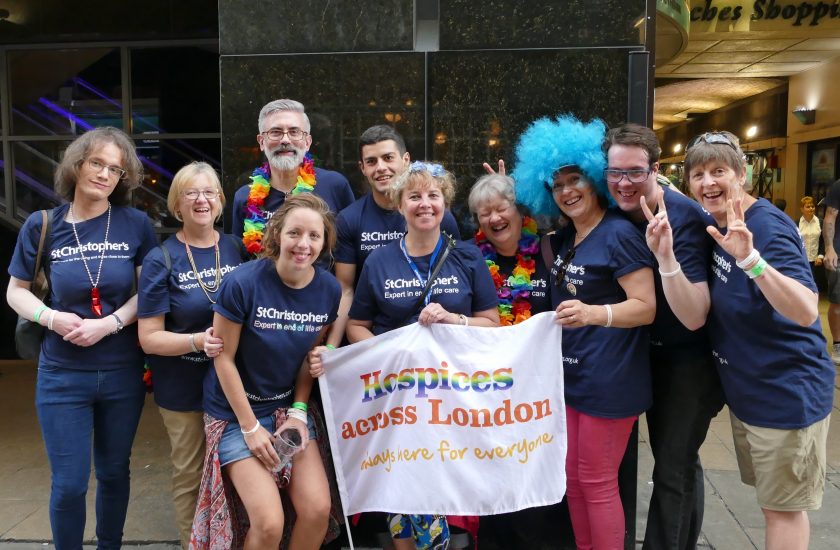 St Christopher’s joined eight other hospices across London to take part in the capital’s Pride in London Parade on Saturday 25 June 2016. This is the first year that staff, volunteers, supporters, patients, friends and families from St Christopher’s have joined together with other London hospices to show their support for the Pride in London parade.

Andrew Goodhead, Spiritual Care Lead at St Christopher’s says, “By taking part in the parade, we hope that we sent a strong message that hospices are here for everyone, whatever your background or community, whenever you need us. We also want to show that hospices are welcoming environments for people from LGBT+ communities to come and work.”

Ros Cook, Community Nurse Manager at St Christopher’s, adds, “The atmosphere at the parade was incredible, and we were so pleased to be there representing not just St Christopher’s but joining colleagues and friends from across London too.”

The Pride in London Parade is the biggest LGBT+ parade in the UK, and is an opportunity for every part of London’s LGBT+ community (lesbian, gay, bisexual, trans* among others) to raise awareness of LGBT+ issues.

St Christopher’s is committed to addressing inequalities in end of life care. We know from research that LGBT+ communities are less likely to access health care in a timely way leading to late diagnosis and poorer treatment outcomes and are more likely to have negative experiences of health care. We are proactively addressing these potential gaps through strategic partnerships, strong internal processes to monitor uptake and experience of our care and personalized care that focuses on the preferences and goals of the person who needs our help and those close to them.