Dr Cicely Saunders, saw his painting 'Christ Calming the Waters', and purchased it for the hospice.

Marian Bohusz-Szyszko was born in 1901 near Vilnius, then in Russian Poland, today in Lithuania. During the First World War Marian served with the Polish army, and resisted the Soviet invasion of Poland in 1919.

Marian was trained in art at the Stefan Batory University and the Academy of Fine Art in Krakow. After his formal education Marian moved into education, teaching art and mathematics. His first art exhibition was held in Gdansk in 1934.

At the start of the Second World War, Marian joined the Polish Army and was captured at an early point in the war. He was prisoner for more than 5 years. During his internment he lectured on both mathematics and art. When released from imprisonment, he travelled to Italy to work with the Polish forces there. He eventually settled in Britain.

In 1963, Marian Bohusz-Szyszko held an exhibition at the Drian Gallery in London. Dr Cicely Saunders, then continuing her tireless work to found St Christopher’s Hospice saw his painting Christ Calming the Waters, and purchased it for the hospice. Cicely began writing to Marian and their relationship developed. Marian became ‘artist in residence’ at the hospice after it opened, and had a studio on what is now Rugby Ward. Marian and Cicely were married in 1980.

A book featuring some of this artwork can be purchased through the bookshop at St Christopher’s. For further information and details please contact the Librarian, Denise Brady. 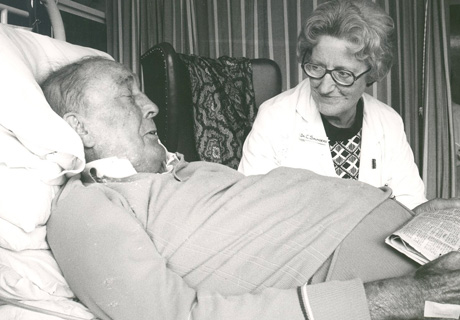