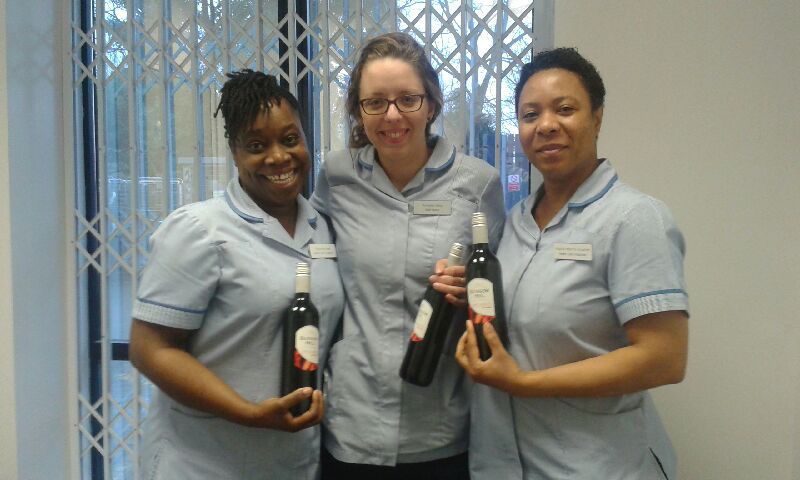 Thanks to the generosity of the customers and staff at The Chatterton Arms public house in Chatterton Road, Bromley, Christmas Day at St Christopher’s in Sydenham was a more festive affair than ever, with a free Christmas meal provided in the hospice’s Anniversary Centre and gifts for staff and patients alike.

Every member of the sixty staff working out of St Christopher’s in Sydenham on Christmas Day, from nurses and welfare staff to receptionists and orderlies, received a box of chocolates and a bottle of wine to take home with them, courtesy of The Chatterton Arms.

St Christopher’s Staff Nurse Annabel Hale, says, “We had a lot fun working at Christmas – it was a wonderful atmosphere and a privilege to look after the patients on such a special day.

“The free wine and chocolates to take home afterwards were an added bonus! Thanks to The Chatterton Arms pub for their generous donation.”

Visitors to the Anniversary Centre in the hospice, including families and friends of patients as well as members of the local community who were welcomed into the vibrant café space, all enjoyed a wonderful free Christmas dinner which was sponsored by The Chatterton Arms. Patients were also all offered the festive meal free of charge, as is customary at the hospice.

Finally, as an important gesture to mark the occasion, St Christopher’s always gives every patient staying on the wards on Christmas day a very small gift, but thanks to The Chatterton Arms donation this year, each patient received a more generous gift.

The Chatterton Arms public house has been steadfastly supporting St Christopher’s since 200, through collections, music events, raffles and much more.

Tracey Austin, Landlady at The Chatterton Arms, says, “We have been putting aside donations all this year so that we could make a difference at St Christopher’s this Christmas; we wanted to recognise staff that work on the day, as well as patients and their families at the hospice”.

Ray Hemmings, Manager at The Chatterton Arms, adds, “Our customers and staff give their time and money generously to support St Christopher’s because it’s such a wonderful organisation which has helped so many people in our local community. We are so pleased to be able to help.”

Community Fundraiser, Georgina Grant, comments, “The Chatterton Arms has been amazing this year, and we can’t thank them enough for their gifts and sponsorship on Christmas Day. I know that the team has already raised £500 since then by selling tickets to win a luxury hamper, which will get 2016 off to a good start!

“It means such a lot to us that a community pub comes together to support and celebrate the work of St Christopher’s. Thank you.”