Patients and children made elephants out of clay together. They created a story from which emerged some lyrics.

The group composed a song. This was performed to patients, families and teachers at a final celebration together with the story of the elephants. Soundtracks is a yearly collaborative songwriting project and has been running for eight years. Students with a musical leaning from the Brit school joined together with patients to create songs.

Eight songs were written by combinations of students and patients. These were performed in a concert for family and friends. Every patient was also given a CD.

Here are some of the lyrics:

‘Funny how, with a wink and a smile you
Relieved people of pain for a while.
Funny how the lessons you taught
Were all worth loosing the battle for.’

‘I see myself in you and whatever you do,
I can’t wait to see what comes after me,
and now I’ve retired all my plans have gone up in smoke,
this incurable disease could happen to anybody,
why me, why me.’

The partnerships that student and patient form during this collaboration are often quite intense. Many of the students find this a formative moment in their teenage years which they do not forget. One student who took part in the project last summer is considering a career in Music Therapy.

Side by Side – St John’s the Baptist primary school St John’s the Baptist are proud to be the first school to have taken part in our project nine or ten years ago. They were nervous at first, but quickly relaxed.

Many children related very maturely and engaged/initiated conversations that surprised and pleased patients. One patient who was new was very moved by the interest of one young student who, when she discovered it was his birthday, suggested we all sing him happy birthday.

Another student, who has asthma, was keen to meet a patient who had an oxygen bottle by her side and they made an instant connection. The theme of the project was ‘Side by Side’.

We rehearsed and sang the song of that name. We painted and adorned two wicker garden chairs with brightly glazed small objects in the form of flowers and insects and attached them with florists’ wire to the wicker. The school now displays the art work to remind the children of the experience. Year Five students from Kelvin Grove Primary School were invited to St Christopher’s to take part in our Schools Project. Over a four-week period the children met patients and hospice staff and were invited to work creatively together. To give structure to their activity we focused on portraits as a theme – self-portraits and portraits of others. The children were given a guided tour of the hospice and introduced to the theme. The children made sketches of themselves, the people they met and the hospice environment. We discussed their experience of the hospice and addressed issues of bereavement. We also filmed the children, asking them three questions:

To celebrate their visit we showed their film in the Anniversary Centre. 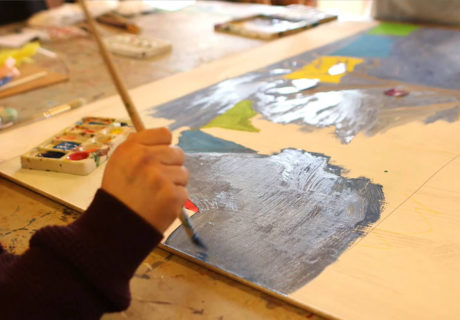