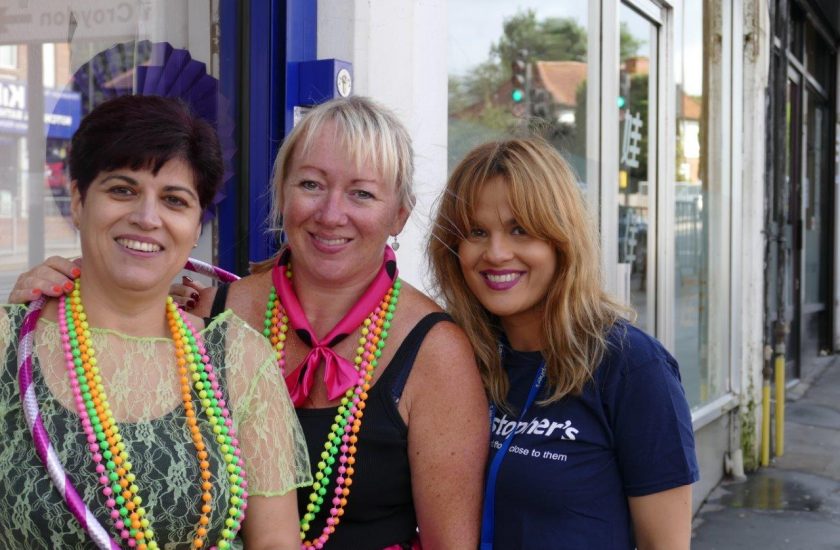 Teams competed against each other to see who could raise the most money and become St Christopher’s Shop War Champions.

Anything goes in love and war and teams were encouraged to come up with a cunning plan to entice more people into the shops including sweet treats, fancy dress, music and entertainment or a ‘live’ front window to attract attention.

We had a werewolf and inspector gadget thanks to Direct Line who took over four of our shops at a bespoke event on 9 September.

On Thursday 24 September teams from Nationwide and Marks & Spencer Bromley went head to head when they took over five St Christopher’s shops for the day. While Nationwide had James Bonds taking over the Locksbottom shop and 80s fever at Selsdon; Marks & Spencer, Bromley focused on cakes, balloons and incredible stock at the Bromley, Hayes and Addicombe shops.

All five shops did incredibly well but there can only be one winner. The first ever Shop Wars Champions title goes to the Nationwide Team at the Selsdon shop who, with their 80s theme, managed to increase the shop’s income by an amazing 102 per cent.

Fran Ward, Senior Fundraising Manager said “The event was a great success and a lot of fun for the companies taking part. I would like to thank all the teams who took part for injecting so much enthusiasm and creativity into giving our shops greater visibility on our local high streets. This resulted in increasing income overall by 39 per cent as well as raising an additional £3,483 in donations for St Christopher’s.”

If your company is interested in taking part in our next Shop Wars then please contact Graham Pearse at G.Pearse@StChristophers.org.uk