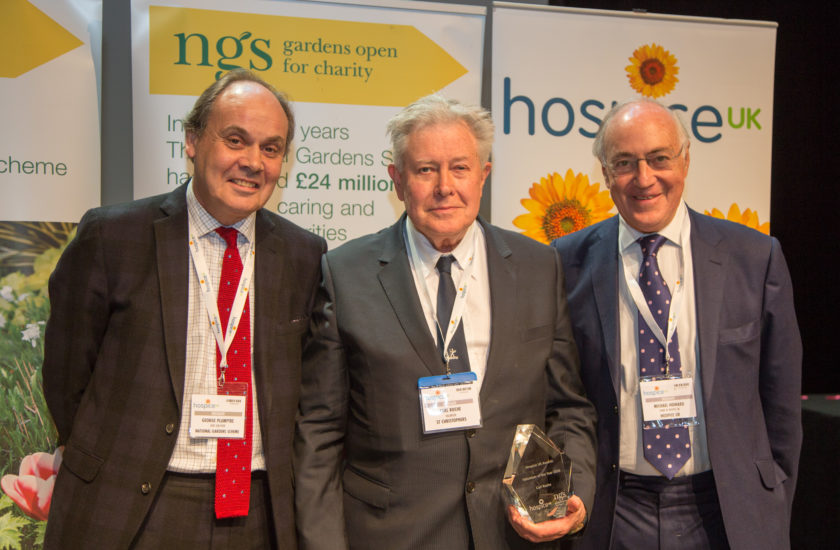 St Christopher’s is absolutely delighted that Carl Roche, who has been a volunteer at the hospice in Sydenham for 33 years, has been recognised for his outstanding contribution by winning Volunteer of the Year at the Hospice UK Awards 2016. The awards were announced at the Hospice UK Conference in Liverpool on Wednesday 16 November, and Carl was proud to receive his award trophy from Lord Howard of Lympne, Chair of Hospice UK.

Carl, who lives in Kenley, has volunteered at St Christopher’s for over three decades and has never missed a volunteering shift. He started out by looking after patients and families, and during his time at the hospice has worked across many different teams, including the Care Home team and Fundraising.

On receiving his award, Carl said, “I was surprised but delighted to receive the award after being nominated by my colleagues at St Christopher’s. It is an honour but volunteering is a pleasure as I work with and have represented friendly, efficient and dedicated staff and volunteers. The public know of the excellent work done by the medical staff, social workers and volunteers helping on the wards. However they are probably unaware of those in the background keeping up high standards such as catering, laundry, cleaning, stewards, library, education including international medical students and care home staff, administration etc. It is rewarding to feel that we have all made a difference to people when they face difficult times and that St Christopher’s maintains its standards as we approach its 50th anniversary in 2017.’”

Carl was nominated for the Volunteer of the Year Award by Julie Kinley, Nurse Consultant for Care Homes at St Christopher’s. Julie comments, “A banker by background, Carl makes every minute count. He one of the most thorough and reliable volunteers I have ever met.

“If he was at St Christopher’s at lunchtime, Carl would set off to help someone else in the hospice during his lunch break, and then return to volunteer again in our office right until the end of the day.  Carl has also flown St Christopher’s flag on every occasion; he always wears his hospice-branded fleece and attends local hospice events at the weekends, selling tickets, taking part and lending a hand.

“Always bright and cheery when he comes to the office, Carl has a lovely sense of humour and is popular with everyone who meets and works with him. I am so delighted that Carl’s dedication has been recognised on a national scale; the award is an amazing tribute to him.”

Heather Richardson, Joint Chief Executive at St Christopher’s adds, “Carl has devoted so much time and energy to St Christopher’s over the years and we cannot thank him enough for his contribution. We are so fortunate at St Christopher’s to have over 1,000 volunteers who help us to support people at the end of their lives in the communities of South East London. Thank you to each and every one of them.”

The Hospice UK Awards, supported by the National Gardens Scheme, is now in its sixth year and aims to recognise the significant contribution that both individuals and innovative programmes have made to hospice care in local communities across the UK.