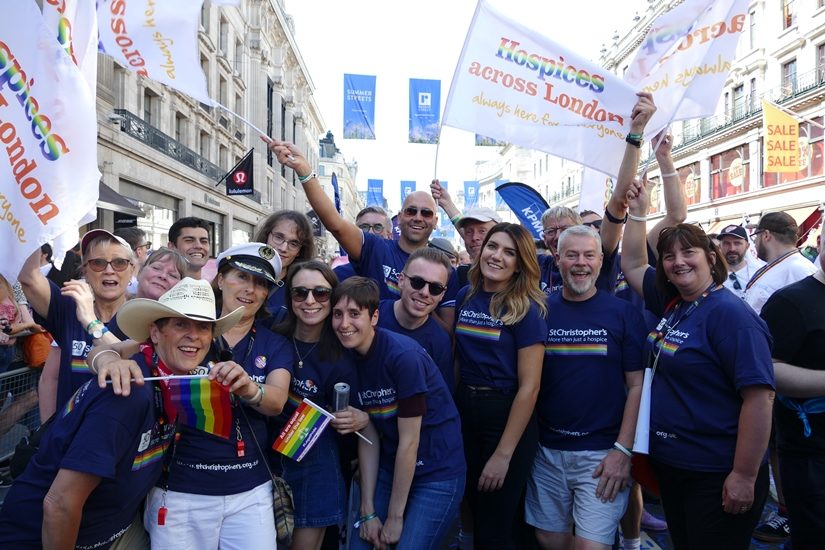 On Saturday 8 July 2017 St Christopher’s joined eight other hospices on the sunny streets of London to take part in the capital’s Pride in London Parade. Over 15 staff and volunteers from St Christopher’s took part in what has become the biggest LGBT+ parade in the UK.

St Christopher’s joined the fantastically joyous occasion to reinforce the message that hospice services are here for everyone, whenever they are needed, and whatever someone’s background or community.

Andrew Goodhead, Spiritual Care Lead at St Christopher’s, says, “This year St Christopher’s is celebrating its 50th anniversary year, and we believe our role as a hospice isn’t just about providing care it’s also about educating, campaigning and changing practice. We want to use this opportunity to open up hospice care, to better explain the help and support we can offer, and to challenge misconceptions about who can use our services and when.

“We also want to show that hospices are welcoming environments for people from LGBT+ communities to come and work.”

Ros Cook, Community Nurse Manager at St Christopher’s, adds, “The atmosphere at the parade was incredible. It was wonderful to be there not just representing St Christopher’s but joining colleagues and friends from other London hospices too.”

St Christopher’s is a Stonewall Diversity Champion and committed to addressing inequalities in end of life care, and as part of the hospice’s equality and diversity programme.

The Pride in London Parade is the biggest LGBT+ parade in the UK, and is an opportunity for every part of London’s LGBT+ community (lesbian, gay, bisexual and trans among others) to raise awareness of LGBT+ issues.