Jane Gibson, 75, is preparing to run the 2019 London Marathon in memory of her daughter, Maxine

In April 2019, Jane Gibson, 75, will run the London Marathon in memory of her daughter, Maxine, who died at St Christopher’s Hospice aged 37. Having only taken up running at the age of 45, this is the first time that Jane has asked family and friends to sponsor her challenge.

“For our family, when Maxine came to the hospice as an inpatient, we knew that the end was coming, which was exceptionally hard, especially when we felt we had to keep cheerful for her children and take care of them too. It didn’t leave much room for grieving. And, of course, you don’t want to let that person go, even though you know they are dying and perhaps they are more ready than you are”.

Jane’s daughter Maxine died at St Christopher’s in 2006, a relatively short time after having being diagnosed with cancer. Maxine was a social worker, living in Lambeth. Previously looked after at home under the care of St Thomas’ Hospital, Maxine asked to come to St Christopher’s because she felt it would make the situation easier for her family, including her two young boys, who were aged around three and nine years old at the time.

“It was the simple things which Maxine found so special at St Christopher’s, like nurses taking the time to apply cream to her skin.  It was true kindness; which should be the very first requisite of anyone working in healthcare”, says Jane Gibson, who has lived in Beckenham for over 50 years.

“The hospice was amazing, and of course there were some lighter moments. Maxine developed quite a black humour about her situation: when a doctor from St Christopher’s once asked her how she was, she replied, ‘I don’t know, I’ve never died before!’ Maxine always thought that the drinks trolley at St Christopher’s was a good thing too; a Bailey’s was her favourite.

When Jane sets out on the London Marathon course, remarkably it will be her 15th marathon. Jane ran her first marathon aged 55, as a one-off challenge. But after an interval of 11 years she and her husband decided to run in the New York marathon. Since then they have completed 12 more marathons in diverse cities including New York again, Chicago, Boston, Tokyo, Berlin (twice), Paris, Rome, Stockholm, Barcelona and Dublin. Since that first occasion, the couple have decided that marathon running is a wonderful way to see the world.

“It’s a unique buzz that you get from running with 40,000 other people, and it’s wonderful to run along the streets of some of the most famous cities in the world, without all the traffic and noise. We make the races part of a city break, and my husband and I have shared some fantastic experiences together”.

“Although”, laughs Jane, “when I enter my date of birth on event registration websites, a little automatic response always pops up saying ‘you realise that this date makes you over 70 years of age – are you sure?!’

Since she will be running London again 20 years after her first marathon , Jane has decided to seek sponsorship to help fund the work of St Christopher’s.

“I work as a physio at a local care home in Beckenham, where several residents are under St Christopher’s care and the support that they are given is exceptional. I also have had friends cared for by the hospice and I know what a difference their support makes to families.”

“My feeling is that if you know someone facing this situation, it’s important to continue to be their friend and don’t back away. Maybe focus on the small, practical things that you can do to help someone out and make things that bit easier. This is where St Christopher’s comes in, and I want to do something to support them in the same way that they have supported people that I know.”

If you would like to inspire Jane as she takes on her 15th marathon, then please visit https://uk.virginmoneygiving.com/JaneGibson10 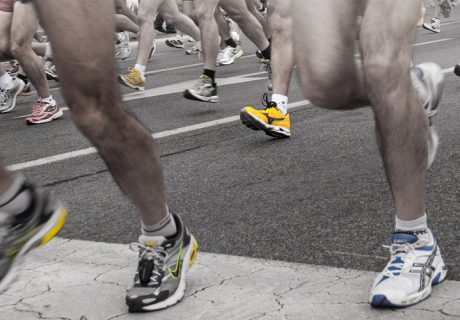