"Klaus' experience changed mine, from what could have been a lastingly painful one into a bearable, acceptable one" 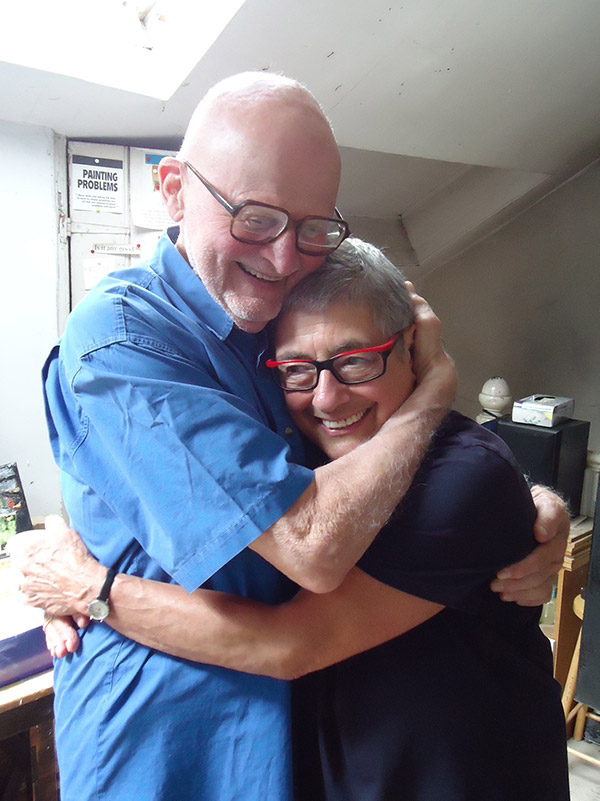 “My husband, Klaus Friedeberger, was born in Berlin on 23 August 1922. In 1938 he became one of the millions of victims of the Nazi regime, and escaped first to Holland and then to England. In July 1940, amid fears of invasion, he was sent to Australia on the infamous troop ship Dunera, one of some 2000 Jews and political prisoners who were interned as enemy aliens along with Nazis and Nazi sympathisers.

After two and a half years in an internment camp at Hay, New South Wales, he spent four years in the Australian Army, and then went to art school in Sydney. In 1950 one of his paintings won the prestigious Mosman Prize, which funded a trip back to Europe, where he settled in London. He intended to return to Australia, but life got in the way and he never did.

Klaus and I met on 17 September 1960, in Florence, Italy. He was on holiday; I, from New York, was on the last leg of a cycling trip around Europe. In the Brancacci Chapel, where the wonderful Masaccio frescoes are, he offered me his opera glasses to see them better. We were married two years later, and he helped me to see better for the rest of his life.

I thank the nurses, care workers, and doctors who looked after us; and all those whom I do not know, who make this extraordinary place what it is: a place of healing

Klaus died at St Christopher’s on 19 September, 2019. He was in the final stage of vascular dementia, and was agitated and extremely distressed after a week at our local hospital, but as soon as we arrived at St Christopher’s he seemed to sense the calm, healing atmosphere of the place. Within minutes his agitation subsided, and he turned over on his side and slept peacefully for the first time in weeks.

We were at St Christopher’s for only two days, but our short stay changed what could have been a stressful, traumatic experience in the hospital to a peaceful, healing one in the hospice. 48 hours after we arrived he died quietly. I think he knew that he was in a safe place, and that he could relax and let go, and he did.

His experience changed mine, from what could have been a lastingly painful one into a bearable, acceptable one. The memory I have of his dying, and especially of the time I had with him the following day, after he had been so carefully, lovingly laid out, will remain with me always. It is a memory of an experience that has been profoundly healing, and that I know will never give me pain. I also believe it has helped ease the transition into my new and very different life without him, after our almost 60 years together.

For this treasured memory, for the loving care that Klaus received at St Christopher’s, and for the quiet, strong support that was given to me, I thank the nurses, care workers, and doctors who looked after us; and all those whom I do not know, who make this extraordinary place what it is: a place of healing. It has been life-changing, and I am deeply grateful.”