We met with Jane Norris from Shirley, whose son, Will, passed away at St Christopher’s in October 2016, aged 18.

“St Christopher were there for us all  during Will’s illness.  During the final stages we all experienced a special closeness to Will and this was made possible by the wonderful staff and the outstanding care that he received.  Will was only at St Christopher’s for a few days, but during those days he was pain free and spent that time surrounded by family and friends. I  find it really comforting coming  back to the hospice, as it was the last place that we were all together with Will. I come here often, just to chat to the friendly volunteers , have coffee with friends and  visit the chapel and the memory tree. There is always a warm welcome here.

Will was the eldest of three; his brother Thomas and sister Yssy came along shortly after him and in 2015 a new addition, James Junior, was born.  Will loved nothing more than going around Kelsey park singing “5 little ducks” to him. He was such a caring brother.  He  asked his younger brother to make sure he looked after  his sister Yssy  and to give any prospective boyfriends a critical once over!

Will was diagnosed in November 2015  with a very rare and aggressive form of cancer. He had an emergency admittance to hospital having suffered symptoms of back pain. He underwent emergency spinal decompression surgery at King’s College Hospital and was then transferred for his cancer treatment to UCLH. A nurse there recommended we meet a lady called Philippa (Clinical Nurse Specialist and Young Adult’s Group Co-Ordinator at St Christopher’s) as she said that Philippa would be able to help us when Will  was home between treatments.  I heard the word hospice and I said no immediately. She re-assured me that  that hospices are not just for end of life care, but also for people with life threatening illnesses and management of daily medical needs. My decision to meet the nurse was a real turning point for us.

When Will  and I first met Philippa, she was a vision in yellow and she became our guardian angel. She was there for us all – the whole family. She initially came to meet us at home and we liked her instantly and she made everything less scary.  She saw Will as often as he wanted and she was so organised – nothing was ever with too much trouble for her. She’d make  sure equipment was delivered, help with  medication and was a listening ear for us all.  She would always go the extra mile too; she’d be on the phone to me late in the evening and text me if she knew Will was having a bad day. She made things happen, and did everything she could to make sure that Will could do all the things he wanted. If Will had a special place to be she would make sure that we had everything we needed to make sure the trip went without any  hiccups.  Will absolutely loved her for that. He had a very long list of things he wanted to do and with her help he did most of them.  She was like a family member to us.

Will was very caring and always put others first. Will’s illness increased his desire to help others. Three days before his second spinal surgery he gamed for 24 hours straight – taking no rest at all – to raise money for Macmillan Cancer Support. I am incredibly proud that he raised £2500. He had so many hobbies; he loved to travel as well as fishing, cooking, anything to do with cars and art. He particularly  loved painting, drawing and graphical art. He did a lot of this during his treatment  at UCLH. The Dr’s and nurses loved coming into his room every day to see his new art  work. He even sold one of his pictures on Ebay raising a further £120 for Cancer Research UK. He had a ticket for a concert he could not attend and asked for his ticket to go to someone in the Young Adult’s Group at St Christopher’s.

Music was  extremely important to Will. He liked everything from David Bowie to AC/DC. His favorite genre was Grime. He’d had arranged to attend a concert in Camden, but as his friend was unable to go I had to step in at the last minute. Will made sure I kept my distance though; he found it hilarious how out of place I felt there. My hearing wasn’t back to normal until a week or so after that concert and it will be an experience I will never forget!

Will passed away in October,  but until September  we were  still desperately clinging onto  hope. When we learnt his cancer was terminal, Will  was even more determined to make the most of things. From the moment he received  his diagnosis, rather than wallow in self pity he looked at everything with fresh eyes. He wanted to make the most of every moment, and that’s why he made his list.  We had a wonderful week full of happiness, laughter and beautiful memories in Chichester, with Will taking on the role of house chef!  Will’s passion for food meant he had long wanted to visit Michel Roux Jnr’s Michelin Star restaurant La Gavroche. That dream came true when he dined at his Mayfair restaurant, and met the chef himself. He also really wanted to stay at the Shangri-La at the Shard for a couple of nights and he was able to fulfil that dream too. Not to mention a boys weekend with his dad at The Grand in Eastbourne. Will was very seriously ill but remained  very strong and brave. For his 18th birthday, all his friends came over, we had the best Caribbean  food and although he was really poorly, it was a lovely evening. It was so special seeing him spend time with his friends and the happiness that brought him.  They are still in touch with us now.

During the last few days of his life Will was still fighting hard, but we could tell he was struggling. He wanted to visit the seaside and so we went to Whitstable for the day. His courage and strength were so humbling to see. His last day at home was spent building the Lego version of the Millennium Falcon. He carried on with it way into the evening. He refused to stop until he finished and, of course, Will being Will he did finish it!

The plan was for Will to pass away at home and Phillipa put in all the necessary things to make that happen; but we knew it’s all about keeping an open mind and through Phillipa we had trust in this place. She made sure everything was sorted and could see past the medical side of things. She always looked after Will’s emotional needs, not just his physical needs. As a family we will always be indebted to her and will be friends of St Christopher’s for life.

He knew  he didn’t have long and wanted to thank the nurses in London. Unfortunately the night before we planned to go, Will was rushed to Farnborough Hospital with breathing difficulties. He made it clear that he wanted to go to St Christopher’s. The doctors phoned the hospice at 2am and Will arrived at around 11am the next day.  I felt such a sense of relief when we arrived. I knew he’d get the best possible care there if everyone was like Phillipa – I was right.

When we got to St Christopher’s we could see Will relax. Philippa was fantastic as always and, despite it being her day off,  she came in anyway to make sure Will settled in.  Linda Fox, a minister at St Christopher’s, gave Will a blessing and he was really happy to share that moment with all the family. Both Will’s dad and I slept here and our extended family and friends  stayed  in the family room. He passed away in the early hours, on 19 October 2016. He was surrounded by his  family and so much love.

The level of care given to Will was extraordinary – he was never suffering or in pain. The one thing we are most grateful for was that he was allowed to pass away with dignity and pain free – this is the greatest gift you can give to the family of a terminally ill loved one. It makes me very sad that other people don’t have access to a place like St Christopher’s. Even after Will passed away  they continue to care for us all.

Will wasn’t afraid at the end and he told everyone that he loved them and that he was ready to go. His bravery and courage was just remarkable – even his oncologist said he was an incredibly brave and selfless young man. Because he was so strong, it inspires me to be as strong as I can be! We could not be more proud of our boy.

We planned the funeral together. He didn’t want flowers – just a Just Giving page set up to raise money for Click Sargent and St Christopher’s. To date it has  raised over  £12,000 and we have more fundraising ideas in the pipeline. His funeral was beautiful and it was a celebration of Will’s life and his amazing spirit. We even had rap music at the church! We played Coldplay, Wiz Khalifa and Bob Marley. We had Faith Evans and Puff Daddy and Sarah Brightman and Andrea Bocelli at the crematorium. There were so many people there; school friends, primary school teachers, it gave me comfort to know he was so loved.

We’ve continued fundraising too. A family friend, Nigel Matthews, is raising money for the hospice by cycling from London to Paris. He and his wife also had a collection outside of Sainsbury’s and Will’s school, Farringtons, has raised more than £3000 through doing things like holding a Santa Fun Run, and designing and selling Christmas cards. I participated in the fun with friend and my son Thomas and we have raised over  £400 for St Christophers. Our company, AV Outsource Ltd, also now donates £1 from every sale to the hospice, raising £120-£150 per month. This is something we’ll continue to do.

Will loved Cornwall.  This magical part of England played a big part in his life; it was his special place where he was happy and relaxed.  One evening that really sticks in my mind was spent on Perranporth Beach at Easter watching the most spectacular sunset.  It was a beautiful  ending to a day during which Will had been laughing, relaxed and happy. It is here that we scattered his ashes this Easter. He said to us ‘if my ashes are in the sea, then I’m likely to visit everywhere I haven’t been.’ which is a lovely thought.

Will asked Philippa ‘Am I the bravest boy you know?’ and of course, our answer and printed on his remembrance leaf at the hospice is “yes, you were the bravest boy’. 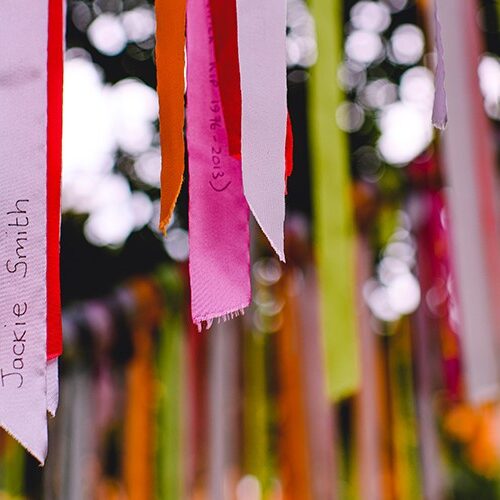