The ride of a lifetime

One supporter, Darren, embarks on his second cycling challenge for the hospice - find out how you can join him In June 2017, 52 riders took on the challenge of cycling from London to Paris and raised an incredible £222,000. Darren Walker was one of these resolute riders and, having enjoyed it so much, was first in line to sign up for the London to Amsterdam ride in 2019. Darren is riding in memory of his father-in-law, John, who was cared for by St Christopher’s.

Darren explains, “My association with St Christopher’s began when my father-in-law, John, was diagnosed with terminal cancer. John was a fit, active man of 74, going to the gym three times a week and always doing something – including helping me to build the extension to our house. The diagnosis was a big blow, not just for John, but the whole family.

Within days John was visited by a St Christopher’s nurse; she was so caring and spent as much time with John as he needed. St Christopher’s nurses also sat with John at night so the family could get some much needed rest. After a couple of nights the nurse woke my mother-in-law, sister-in-law and wife just before midnight to say John was in the last moments of life, giving them precious time to say their goodbyes.

I saw the ‘London to Paris’ challenge in the St Christopher’s newsletter. I knew what the fundraising would mean to the hospice and, after all that they had done for John, I decided this was the least I could do.

After signing up, thoughts started to come into my head; what if something happens? As I don’t know anyone will I be riding on my own? The answer to these questions are simple, if something happens to you or your bike there is a support team to help. If you are thinking of doing this ride on your own you will find someone to ride with. I ended up cycling with three guys who I now call friends and for four days and 290 miles we had the best laugh. After the ride people asked me how it was and I always say the same thing ‘it was the longest, hardest ride I’ve ever done, but it was the most fun I’ve ever had’.”

Sign up to our London to Amsterdam challenge today 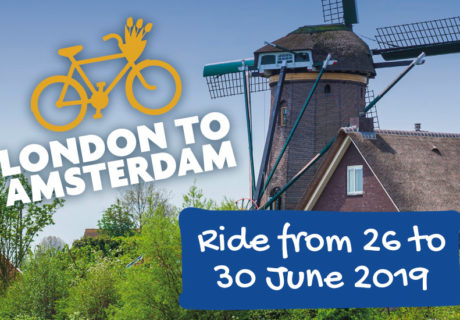